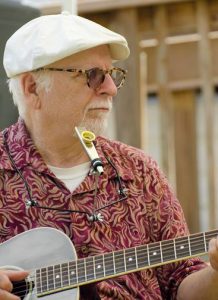 Since his teens Neil has had a keen interest in vintage acoustic guitars. Always a “catch and release collector”, he has owned dozens of old Martins and Gibsons. But Stella guitars in particular grabbed his attention. Neil realized that Stellas were the instrument of choice for his heroes like Charley Patton, Willie Brown, Barbecue Bob, and Leadbelly. In 1999 Neil finally got his hands on his first vintage Stella guitar and thus began a 20 year exploration into the “World of Stella”.

Over the next twenty years Harpe’s catch & release vintage guitar hobby morphed into a small home business – finding, restoring, playing and ultimately selling Stella, Sovereign and Galiano guitars. He has had so many of these instruments pass through his hands that he lost track of how many. He has seen and played more old Stellas than just about anybody on the planet.

When he was in his teens Neil had the opportunity to hang out with blues guitar players like Mike Stewart (aka Backwards Sam Firk), Max Ochs, John Fahey, and Tom ‘Fang” Hoskins – all of whom shared their guitar chops.

In the 1990s Neil introduced his lifetime’s passion of the blues and vintage guitars into his art. He did a number of life sized paintings of vintage guitars and a series of mixed media portraits of blues musicians: Blind Boy Fuller, Blind Willie McTell, Lard Belly, Lonnie Johnson, Memphis Minnie, Blind Lemon Jefferson, and many more. This series of images eventually led to his illustrating Ted Gioia’s book, “Delta Blues,” W.W. Norton, 2008

We use cookies to ensure that we give you the best experience on our website. If you continue to use this site we will assume that you are happy with it.OkNoPrivacy policy